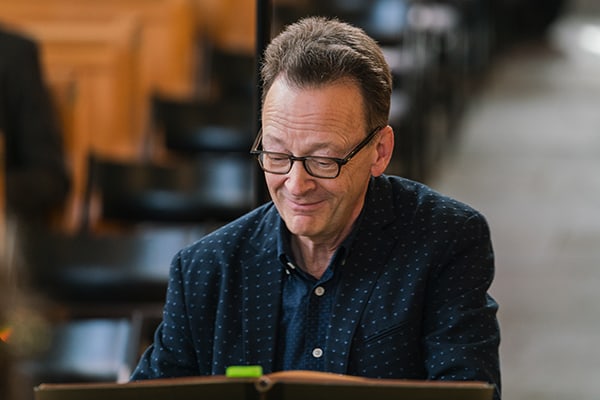 Rudolf Lutz (*1951) is an internationally acclaimed pianist, organist, harpsichordist, composer, conductor and improvisor. He was organist of the church Sankt Laurenzen in St Gallen from 1973–2013, and conductor of the Bach-Chor St. Gallen from 1986–2008. Rudolf Lutz is a former lecturer for improvisation at the Schola Cantorum Basiliensis, and has taught thorough-bass at the School of Music in Basle and oratorio studies at the Zurich University of the Arts. Today, he dedicates his time to diverse concert engagements and leads masterclasses in Europe and Asia.

As a conductor, Rudolf Lutz strives to achieve a highly nuanced interpretation of a score. His in-depth studies of historical performance practice and his extensive experience as a concert artist furnish the various choral and instrumental ensembles that he conducts with significant artistic insight. Nonetheless, musical expression and unhindered joy in music making remains his overriding goal.

Rudolf Lutz is a respected composer; his sinfonia for cantata BWV 158 by Bach and his Christmas oratory “An English Christmas” have received particular acclaim. In 2017, his cantata in homage to Luther – a work commissioned by “Deutschlandfunk Kultur” – received its world premiere at Wartburg castle. In 2018, his second cantata (“Landsgemeindekantate”), which is based on a traditional Swiss hymn, also received its premiere. The librettist for both cantatas was Karl Graf.

Rudolf Lutz’s extraordinary breadth of experience single him out as the ideal conductor for the performance of Bach’s entire vocal oeuvre, the mammoth project undertaking by the J.S. Bach Foundation of St. Gallen. He assumed this role in 2006, the same year he received the Canton of St Gallen’s prize for culture. In 2015, Rudolf Lutz was awarded the prize of the “Stiftung für Abendländische Ethik und Kultur” and the swiss musicaward (2019) for his lifetime achievement. In 2016, Rudolf Lutz was named a board member of the Neue Bachgesellschaft e.V. Leipzig. In April 2021, Rudolf Lutz was awarded an honorary doctorate from the Faculty of Theology at the University of Zurich.