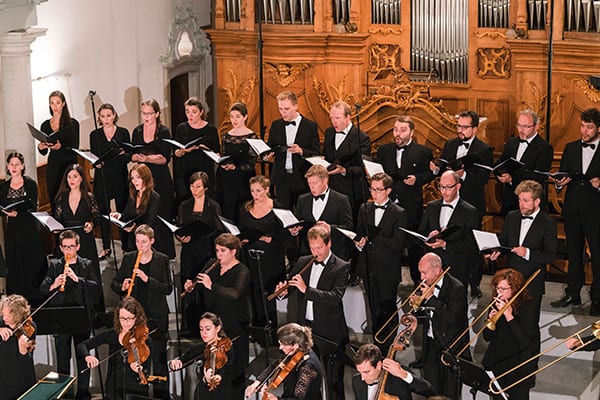 The Choir & Orchestra of the J. S. Bach Foundation was founded by Rudolf Lutz in 2006 to realise the Foundation’s mission of performing and recording the complete vocal oeuvre of J. S. Bach.

The ensemble is made up of professional musicians who are experienced in historical performance practices and relish the challenge of exploring a contemporary and vital interpretation of Bach’s cantatas. The Orchestra comprises two alternate formations that are led by Renate Steinmann and Eva Borhi. Additional instrumentalists are engaged when required for larger works. The Choir is made up of young professional singers; its cast numbers up to 40 choristers, some of whom also have the opportunity to appear as soloists.

Conducted by Rudolf Lutz, the Choir & Orchestra has been performing Bach’s cantatas in a monthly concert cycle since October 2006. Throughout the ongoing work of the Foundation’s project, the ensemble has continually developed and matured. Today, the Choir & Orchestra is distinguished by its homogenous, yet flexible sound and its wealth of experience in the interpretation of Bach’s works. The ensemble’s repertoire also includes works of other genres, including sacred and symphonic works by Handel, Haydn and Beethoven.

The Choir & Orchestra has garnered a strong international following and performs in renowned Bach festivals and concert halls throughout Europe.